Although somewhat of a new kid on the block when it comes to producing dance music, Maara has been shifting gears in the scene and is killing it on all fronts as of late. With a killer debut EP landing on NAFF Recordings earlier this year, followed by a recent follow-up on Daniel Rincon run record label ISLA, her productions hit the sweet spot between the ethereal ambience of hazy afterhours ecstasy and tripped-out techno leanings.

Wasting no time, Maara dives deep into a propulsive assembly of proggy house delights, blissful trance grooves and hypnotic techno, as she supplies our latest mix and we catch up to hear the latest, including upcoming EPs for Radiant Love and X-Kalay. Strap in!

Hey Maara, how’s life treating you? As we close in on the end of the year, what have been your personal highlights?

Hi, all things considered I’m doing well! Definitely getting to share some of my music this year was a highlight, as well as getting to play a few shows for the first time ever this summer and getting to visit my good friend in Berlin in the fall. Those have all been really special moments to me. Being with friends, laughing, making music, and all the little things have meant the most this year.

What’s the status in Montreal right now… anywhere close to ‘back to normal’? And can you give us an insight into the scene over there? Especially for those unfamiliar, what kind of vibe can visitors expect?

Sadly clubs are shut down again as of this week. Clubs have been closed (no dancing legally) for almost two years now. Restrictions were finally lifted about a month ago but now it’s all shut down again. It’s quite disappointing but definitely understandable given the amount of new cases. There’s a dynamic scene here for dance music, from lots of DIY raves organized by collectives who put together great events to clubs who support local DJs as well as international DJs passing through. Lots of clubs and people who love electronic music here, the city has a European feel and is a laid back place with a huge artist population. Visitors can expect a lit vibe under normal circumstances.

You are still relatively new to releasing music in the electronic scene, as for many years you were producing hip hop music under the name Massie Dome. Why the shift? and how does your musical roots influence your current approach & vision?

A lot of my friends were DJs / dance music producers and I felt inspired by that energy living in Montreal and attending raves myself. I’ve always loved a variety of different music and was interested in trying my hand at producing dance music and taking on something I hadn’t done before. I think producing hip hop has definitely influenced the feel of my music (at least it comes through in some tracks), with how I make drums and how I structure/arrange my music, and the incorporation of a lot of 808 basses/drums and such. I also find my music influenced by my previous vocal project including lots of vocalisations, the human voice and feel etc.

When I made hip hop I often felt my productions were influenced by dance music too—ambient and electronic elements were always something I wanted to include so I think it goes both ways. I’ve always been interested in the more experimental side of things that aren’t strictly one genre. Both my friends Lis Dalton and Sophie (D. Tiff) have been incredibly influential and continue to inspire me in my music practice—I attribute a lot of what I’m doing now to those relationships. 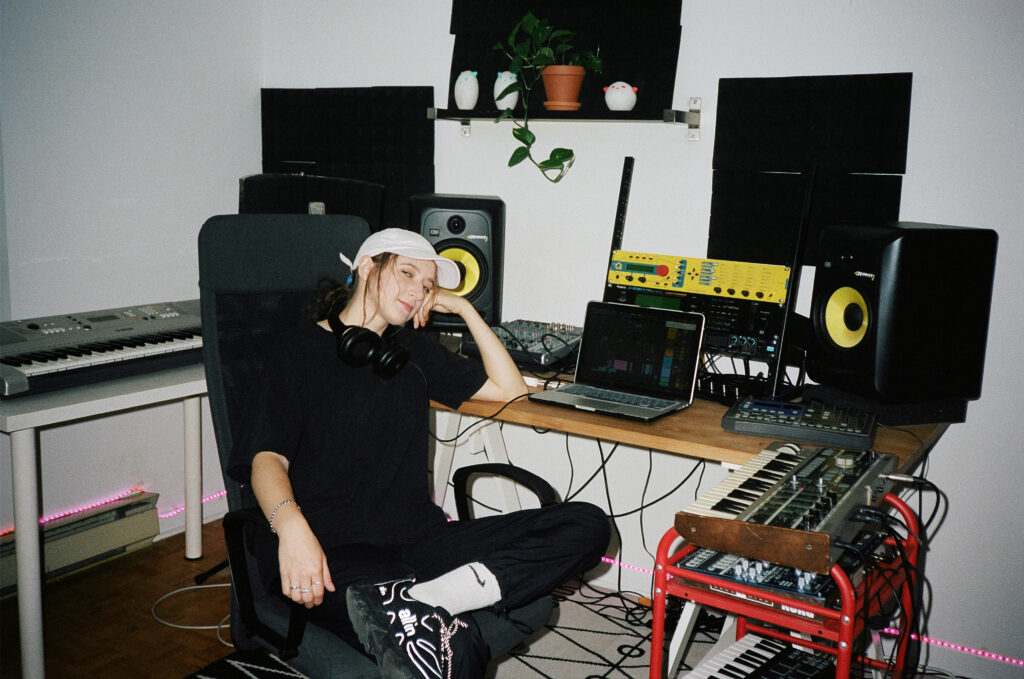 We were really feeling your release on Vancouver label ISLA earlier in the year, which included great remixes from D.Tiffany and NAP. Fittingly described as ‘5 trance-inducing rides into purgatory’ by a well known music publication, how did that all come together?

I met NAP (Daniel Rincon) in early 2019 via my friends (Lis & Sophie) before I was making dance music. We really hit it off and became friends and stayed in touch. When I started making dance music I showed him some of my work and we began working on something together and shaping the vision for the EP. I’ve always been a huge fan of his label which has also played a part in shaping my own productions. I always come back to favourites like the ‘I Believe Outside Time’ EP and the Ambien Baby music, as well as the stunning Pillow Queen release. Was honoured to be able to contribute a release to the label as well as work with a good friend in the process.

We understand you have been working on a project together with Priori (who we’re big fans of and featured on the platform earlier in the year). Having released on his NAFF Recordings earlier, what can you tell us about the collaboration and connection with Francis?

Yes! I also met Francis in 2019, and we would see each other out from time to time. That fall I started making dance tracks, and one night while I was at the N10.AS studio Francis and I randomly ran into each other and started chatting. We didn’t know each other well at that time but I happened to have my laptop on me and played him some tracks I had been working on. He asked me to email him the tracks and I did, but I never heard back. (Truly was not expecting anything because I felt very new to making dance tracks so I didn’t have any great expectations.) On New Year’s Eve 2019-2020, Francis and Lis were playing a show that I was at when Francis put on my song while I was in the crowd. I was shocked to hear it! Turned out he did email me back wanting to work on a release, I just never checked that email account haha. We discussed it after the show. Throughout the process of working on the EP me and Francis became very close friends and remain so.

We started working on music last winter and are pretty much almost done. Just a few things to wrap up, but the release will include some turbo bangers as well as some more tripped out twisted tunes. I think it encompasses both our sounds pretty well.

You also told us that you have some pretty exciting music releases coming up too. Can you give us an insight into the EPs coming up on Radiant Love and X-Kalay? And what else might be in the works for 2022?

Yup! Long time coming, but the Radiant Love release is a little bit more trancy and playful, cheeky and fun. I’m super excited for it and don’t think the EP could have found a better home than with Radiant Love. The X-Kalay rec is a little bit more dark and tripped out, also really stoked for that one to come out too! I’m working towards doing another EP with Naff, as well as a few other things which I’ll keep a surprise for now that I’m super super excited about… and some remixes and tracks for compilations of course!

Finally, what can you tell us about the mix you’ve recorded for us?

I wanted to make a fun mix full of bangers that makes you want to dance and party. I was really feeling that energy before with the clubs being open. With the state of the world right now, the scene being shut down in many places and the holiday season approaching, hopefully this mix can bring some joy. It includes unreleased tracks from Reflex Blue, Tapestry of Sound, and lots of unreleased material from myself.